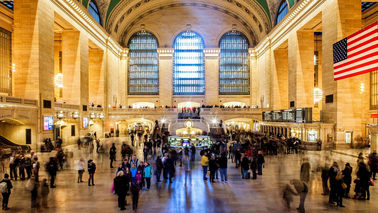 James is just this guy, y'know?  Humble, intelligent, charming. Eyes a color you don't know the name for. He'll take you for a bike ride with his company Albert and James in the morning, play a board game with you with his board game group Victory Pints in the evening and then prattle on about D&D and cocktails at night. Only in the morning will you realize that it was all a ploy and your jewels are no longer in the safe. Instead there's a note so beautifully written that the police officer who collects 'it' as evidence breaks downs in tears. You sob with him as the neighborhood wakes up around you.

Crammed with giant buildings running down huge avenues Midtown East is the most “City” part of New York City. On this walk we go around some of most famous buildings in New York (in addition to a few we just like a lot!)  From Beaux Arts to Art Deco to International Style and more we’ll run the architectural gamut as we explore the giant canyon that is Park Avenue and neighborhood. Also in this tour we go in and all around Grand Central Terminal a landmark that has shaped Midtown more than any other building.

We’ll talk about the tunnels of Park Avenue, cold war missiles, secret rooms, whispering galleries, the importance of the oyster to New York City, where to find a lost fake leg left on Metro North and much, much more....

Along the way we will also talk about the Waldorf-Astoria, the Chrysler Building and many more cool buildings (included a few odd structures that never got built!)

This walk meets in Midtown. Exact meeting info will be sent the day before the walk!